Maternal guilt sometimes takes bizarre forms. But one thing is sure: competing with a domestic goddess doesn’t help. 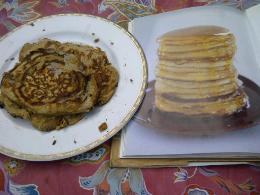 I am working slightly too hard at the moment, and often on weekends too.  For a few weeks now I’ve been telling myself I should safeguard the weekends. But that’s easier said than done. This Sunday I gave a talk about Magda at the South Bank Centre, next Saturday I will have to man the Peirene Roaming Stall.

Knowing that I won’t be around for lunch today, I decided to serve a glamorous breakfast with home-made smoothies and American pancakes a la Nigella Lawson. My children love them. Nigella cooks them with white flour. My ambitions, however, went further. Not only did I want to serve my family what they love but I also wanted to provide them with healthy nourishment. So I used wholemeal flour instead. The end result you can see on the left. Not very pretty I had to admit. Nevertheless I put them on the table. A pancake is a pancake I told myself.

My family nibbled at a couple and then quietly opted for the croissants my husband had bought from the corner shop.

There was once another occasion, many moons ago, when I had laboured for hours with love and affection over a meal for my family. I can’t remember the recipe. But I know it was exceedingly healthy – probably involving a combination of beetroot, spinach, liver and perhaps a few chickpeas. Our son in his highchair threw the food on the floor. Our daughter closed her mouth and put her head on the table. My husband asked politely what we were having for pudding. And I blew my top. I took food, plates, bowls – the lot and threw them into the bin. Then I rang my mother-in-law. I told her that her son had refused to eat my food. I handed the receiver to my dumb-struck husband and stormed out of the kitchen.

I went for a run and calmed down and, later, I asked my husband what his mother had said to him. ‘Oh dear,’ were her only words. What a wise woman.

So the moral of the story: 2013 is still my husband’s lucky year (as I have mentioned on a number of blogs in recent months): His mother did not receive a phone call. As for my children: they headed out for their Sunday well-fed on croissants. And I? I have decided to never second-guess Nigella again.