I knew this would be painful. I knew I would cry and scream and swear. And so for months, in fact an entire year, I put it off. Until I could hold out no longer. Until 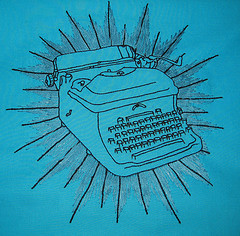 it just had to be done.

I was going to buy a new computer.

Life was bliss until two weeks ago. For five years I had run my business happily from my PC laptop. To save my neck I had propped the computer on a plastic stand and had bought a separate keyboard and mouse.

But I knew that computer inside out. It knew me inside out. And we had experienced much together. We were an item.

But eventually the Nymph confronted me with an ultimatum. ‘Either the PC or me,’ she said, throwing a disdainful glance at the machine on my desk. ‘I can stand it any longer. The noise is unbearable. The start-up sounds like a plane taking off.’

I took the laptop to an expert. He shook his head. ‘I’m afraid your machine is old and tired.’

So two weeks ago I bought a new computer. A big, flat screen desktop. An IMac.

I hated it. I hated the icons on the screen. I hated the way the mouse scrolls. Emails got lost in the transfer. I had to type in all my passwords again. And some I could no longer find. In addition, my neck – despite the big screen  – felt worse because each time I approached the computer I tensed.

I admit I’m a conservative at heart. I don’t like change. And I am no good with transitions. I threatened Peirene to shut her down and send her back to her ancient Greek gods. I told my husband that I would return to pen and paper and stop using computers all together. And if someone wants to communicate with me, they could very well knock on my door. I would start a trend by no longer being available online.

My tantrum lasted a week. And now? I am the happiest woman on earth. My new machine is  so easy to use, so efficient, so beautiful, so fast, so quiet. I don’t know how I managed before.

Peirene’s pleased too. She appreciates the stylish lines and the famous brand. She wants an IMac too. But I told her before we can afford any more new computers, we need to first earn some money. So in the next few weeks you will see Peirene very busy selling books at our roaming stalls.