There and Back down Memory Lane

This weekend I took a trip down memory lane. I flew back to Heide – the small town in the north of Germany where I 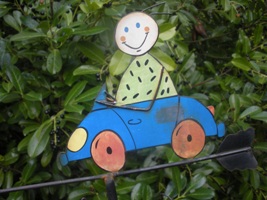 grew up. In May 1986 I did my Abitur (German A-level equivalent). The morning after the Leavers Ball, I caught a train, then a plane, spent a year in Israel and eventually ended up in London.

Of course I’ve been back to Heide many times over the last 25 years. My parents still live there. But most of my school colleagues I never saw again. Until last Saturday. Not everyone came to the 25 Year Reunion. Some couldn’t be contacted, other couldn’t come or didn’t want to. From the 60 people in our year, 30 turned up. Plus a few teachers too.

We met outside the school gates at 3pm. I recognized the teachers and some of my school colleagues immediately. Other, however, I just couldn’t place. They had to mention their names and I had to scrutinize their faces before the penny dropped. Looking at them, I realized that a quarter of a century had undeniably elapsed. With them – and therefore with me too.

We visited the school building, walked down once-familiar corridors and looked into our former class rooms. Afterwards we went to a restaurant. We exchanged notes on professions, marital status, number of kids. We compared memories. And then conversations developed. By midnight the 25 years had disappeared. The faces, voices and mannerism of the middle aged people had found their teenage matches in my mind. Memory and present reality reconciled into a coherent picture. No one had actually changed beyond recognition. And although I couldn’t have precisely guessed in advance the facts of everyone’s lives, they all made sense and formed a unified narrative when revealed.

For example, there is the TV presenter who also doubles as a Nia dance teacher – as a teenager she gave solo dance performances in front of the entire year. And there is the Art school teacher who has won the Hamburg Teacher of the Year award and also runs a fab little record label specializing in new Reggae releases on 45 Vinyls – for the Abitur celebrations he wheeled a VW Beetle car into the school and we signed our names with permanent marker onto the hood.

As for me, the reunion provided an unexpected opportunity to make sense of my life with Peirene. “You used to ask questions when no one else dared to put up their hands,” a former school colleague told me on Saturday. “Yes, for a teacher you sometimes proved quite a challenge as you didn’t let us off the hook with half-right explanations,” my ex-teacher added. I had forgotten these details of my former life. But I suddenly realized that it was totally logical to have ended up with an ancient Greek nymph who loves asking questions and doesn’t take “no” for an answer easily.