The Most Amazing Washing Up Trick

We launched Peirene No 11, Mr Darwin’s Gardener.  Author Kristina Carslson came to town and caused a storm. Our Supper Club on Thursday 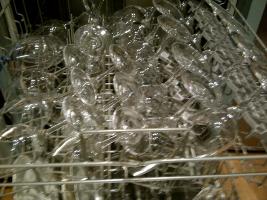 was gate-crashed and the Salon was attended by guests who came from as far away as Oxford, Reading and even Southampton.

Fair enough – the Supper Club gate-crasher was my friend Joanna. She thought she could buy a ticket on the door. But the guests who travelled three hours across half of England to attend the Salon were genuine. They had booked their tickets way in advance. I didn’t know them. They didn’t know me nor any of the other Peirene Ladies. They came because of the Salon’s reputation.  I felt honoured indeed.

The Nymph’s highlight, however, came this morning when after 4 years of salons we finally discovered how to stack the wine glasses successfully in the dishwasher. In fact up to this morning we washed them by hand. 80 of them. After each salon. I had tried to put them into the dishwasher once – upright. It didn’t work. They were too tall. Of course I could have gone out and bought shorter ones. But since we now had the tall ones already – and they do look more elegant – so I decided to keep them. And any way, the Salon only happens four times a year. So we might as well wash them by hand. That was my reasoning.

Peirene of course moaned and complained. But after two hours the job each time was done and we forgot about the experience until the next Salon.

Today, however, our live changed forever. Thanks to either Maddy or Jen or maybe our intern Elenor. One of them stuck the first load of dirty glasses into the dishwasher last night. When Peirene opened the machine this morning, a shriek of excitement escaped her mouth. I jumped. For a moment I thought sometimes terrible must have happened.

‘You have to see this.’ I rushed across the room and looked over her shoulder. A beautiful sight. 24 wine glasses neatly fitted into the top shelf of the dishwasher. The trick: not to stand them upright but to lay them at an angle. We ran four machines for half an hour each time and were done with the washing up.

‘I don’t believe you never thought about this’ muttered Peirene. Frankly, I can’t believe it myself. But then again perhaps the moment served as a useful reminder. The nymph and I may have hosted 18 salons but we still have a great deal to learn.