The Polish agent Agata Pieniazek first gave me a copy of the German translation of Chasing the King of Hearts at the London Bookfair in spring2010. 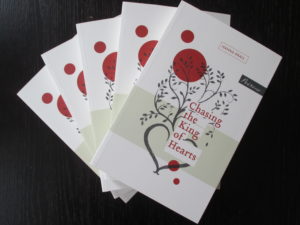 She told me that this was an amazing book about the Holocaust and the author really ought to be more widely known.

I put the book at the bottom of my ‘maybe to consider in the remote future’ pile. There are a lot of good books in English about the Holocaust. I wasn’t sure that such a work would fit into one of the Peirene series.

Six months later Agata and I met at the Frankfurt fair. She asked me if I had read the book. I said no and that – honestly – I couldn’t imagine the book working for Peirene.

‘Why?’ I asked, suspicious. After all, her job is to uptalk books.

‘Because of its style – so sparse but doesn’t miss a beat,’ she replied.

That caught my attention. I dug the book out from the bottom of the pile and started to read. I didn’t stop until the final page.

Peirene No 12 has many well-known ingredients: it’s a love story during war time and features the Warsaw Ghetto and Auschwitz.

And yet the book is unique. Hanna Krall survived the Holocaust by hiding as a child in a cupboard. All her books concern the Holocaust. And celebrate survival. She is now in her 80s and only published Chasing the King of Hearts six years ago. Since the beginning of her writing career, Hanna has worked on perfecting a style and language that tries to come as close as possible to expressing the inexplicable: why do some survive and others don’t?  In Chasing the King of Hearts she gives us the opportunity to share in the terrifying, sad and lonely experience of survival. Without pathos. Without dramatization. But with all the contradictions, sacrifices and absurdities that survival entails.

Chasing the King of Hearts is a masterpiece. Perhaps the best Peirene book yet.