The Arrival of the Gremlin

The post in our house used to present a problem. It would fall through the letter box onto the doormat. Husband stepped over it, Nymph skipped around it, children trampled across it. Everyone knew of course that I had to eventually pick it up 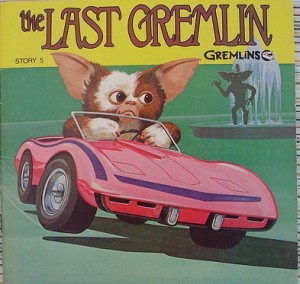 But sometimes I would go on strike and refuse to pick it up for as long as I could without jeopardizing my business.

This little experiment had two results: Firstly: as I watched the post accumulating on the doormat, I became aware of a growing resentment towards my family. And secondly: Once a thank you letter from my mother-in-law lay unopened for a couple of weeks.  She has never quite forgotten or forgiven.

So, eventually I took an executive decision to save the peace of the family. And since there was really only one feasible option, I embraced it with joy in my heart. I became a martyr. Every noon I now bend down in submission to collect the letters from the doormat without a murmur of complaint.

And I shift them about six feet to create a second neat pile on the stairs.

But alas, calamity has struck. And I would like the world to know that I am not to blame.

It was our son’s 15th birthday last week. The previous week cards from his grandparents arrived. I recognized the hand writing. I collected them from the doormat and added them to the pile on the stairs. When I prepared his birthday breakfast, I wanted to put the cards on the table. But they were gone. I’ve searched the house, I’ve asked husband and children.

‘But I didn’t touch the pile, either,’ I reply in all honesty.

‘There was money in grandma’s envelope,’ my son points out.

‘You will have to confess to my mother that you’ve lost her letter again,’ my husband laughs. He finds the idea amusing.

‘I didn’t lose it,’ I defend myself. I am not sure I find this a laughing matter. ‘And if you truly love me, you will ring your mother and confess to her that it was your fault. You mislaid her card.’

‘But I didn’t.’ he replies with unhelpful stubbornness.

We haven’t yet told my mother-in-law or my parents. I am still hoping Peirene might find them. I’ve sent her to Mount Olympus to seek help from the ancient Greek gods. But I fear the worst. Because it’s becoming clear that in addition to a classic nymph the house may also host a Celtic post gremlin.  And once a post gremlin captures a birthday card, it’s gone for forever and a day.