Sunbath of a Tortoise

Peirene is a nymph who is at heart a tortoise. I finally understood her real psychological make up. And – let me be quite frank – do not even 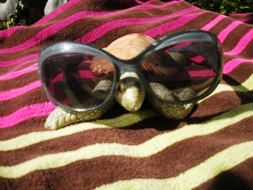 dream of mocking her. Or have you never heard of the famous fable of the tortoise and the hare?

Big publishing houses like to scare small publishing houses. Especially at book conferences. After publication date, the book has a window of two months, six weeks, four weeks to make or break it. The window gets smaller with every conference I attend.

When Beside the Sea was published beginning of February, for the first three weeks it did well and I secretly hoped my nymph was becoming a big-time superstar diva. Then things went quiet, terribly and worryingly quiet. “Books have their own momentum,” a colleague, from a small but definitely successful publisher reassured me (one of his books has just been short listed for the Orange). I didn’t believe him and complained bitterly to anyone who cared to listen that only one woman, Lynne Hatwell from dovergreyreader had so far reviewed Beside the Sea. All the other reviewers, in the papers and online, were men.

And then this week not only one woman but three announced their reviews of Beside the Sea. Madeline Clements in the TLS,  Kim Forrester on her book blog “Reading Matters” and Jackie Bailey  from Farm Lane Books (who will publish her review next week). And that’s not all. As you might know I feel very strongly that Beside the Sea is not only a book that ought to be read, but is also a book that should be discussed. A friend of mine was courageous enough to put her opinion about Beside the Sea on my facebook page, unprompted. She finds the book disturbing and a great “semi public” discussion on the page developed between us.

After such an exciting week, I couldn’t resist to check the book’s sales ranking on Amazon. Over the last two months it’s been a sitting tenant at around 130,000. Yesterday, it was at 29,000 ( and a few). Today, I am afraid to say, it’s getting back to it’s usual heights at 95,526. The Amazon sales ranking system is of course a bit of a sham. All it takes for a book to shed a few thousand ranking points is to have two or three people buying it at the same time.

But I really shouldn’t belittle my nymph’s success. Haven’t I just figured out, she is a tortoise? She belongs to the kind that wins races slowly. Random House should look out.

On the other hand, there is no need for them to panic yet. At least not for today. Peirene clearly isn’t in a mood for a race. Instead she gave in to the temptation of the gorgeous summer day and decided to take a well deserved sun bathing break.