The Nymph is in the dog house. I put her there to cool down. She’s been on my case all weekend long and frankly I need a break from her. 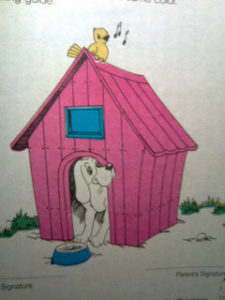 It started a few days ago when a totally unexpected piece of news reached Peirene HQ.

I have been short listed for the h.Club100 list – Time Out  and The Hospital Club’s search for the one hundred most innovative and influential people in the British creative industry.

This wonderful honour dropped into my inbox as a surprise. I did not put myself forward, I wasn’t even aware of this list. Needless to say, I am delighted.

The Nymph barely managed to congratulate me. Instead she threw one glance at the list and immediately claimed that it was partial and unfair.

‘Because it has many omissions.’

‘Me.’ She replied with a sullen face.

‘Your name is right next to mine.’ I corrected her.

‘But you are the one who is short-listed, I am just an appendix.’

My husband, too, has issues with the list and feels that some of the nominations have been unduly received. Especially when he considers my taste in films.

On Friday we decided to have supper in front of a DVD. I ordered the curry while he went out to get a film. ‘Something American, please. Not too much depth and lots of action and good looking men, ‘ I requested him to bring back. ‘ He returned with Distance by Turkish director Nuri Bilge Ceylan, about two incompetent, not very good looking man in a wintery Istanbul. They hardly talk, in fact they hardly do anything. I watched the first twenty minutes while eating my curry, then I went to bed. My husband joined me two hours later. ‘A stunning film, a true cinematic experience,’ he told me the next morning. Then he added: ‘I don’t believe that one of Britain’s 300 most creative people couldn’t appreciate a great film.’ He has repeated this sentences a few times over the weekend.

So, by Sunday evening he was about to join the Nymph in the dog house. However, in the last moment he managed to redeem himself. The h.Club100 final list will now be decided by public online voting and my husband has voted for me. I, in return have promised him to give Distance a second change next weekend. I might have to order a coffee after my curry, though, to get me to the end.