Seven has always been a magical number. After all, God created the World in six days and rested on the Seventh, Snow White found herself 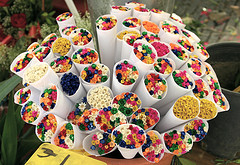 Robin Robertson, the Scottish poet, was our guest. He is one of my favourite living poets. I initially approached him over a year ago to invite him for a reading. Robin’s answer was short – no. Earlier this year we met at the prize giving of the Best First Novel Award. We had a nice chat. I tried my luck again. This time he said yes.

When he rang the bell and I opened the door for him, he stood there with a pot of flowers in his arms. I was immediately touched – flowers for the hostess?! No author had ever brought me flowers before. He said no, though with a smile, they are not for me, they are for his garden.

So by the time we were all seated in the upstairs room for the reading, I was nervous enough to stumble three times in an intro speech of ten sentences. Peirene was very unhappy with me and whispered into my ear, that indeed she might look for a new publisher if I continue behaving like that.

Then Robin began to read. At the start people shuffled to get comfortable on their plastic chairs borrowed from the primary school and I worried that this evening might constitute too much of a cultural challenge for some. Eventually, however, the shuffling stopped. You could have heard a needle drop, as the chilling and dark images of Strindberg’s ingenious world appeared before our eyes. The reading lasted an hour, it felt more like 15 minutes. The audience was thrilled and queued to talk to the poet afterwards.

When the party had dwindled down to 10 people at around midnight and the whisky was on the table, Peirene, a little tipsy, egged me on to ask Robin why he had turned us down when I asked him initially.

You do get approached by some weird, quite mad people, he explained. And it was only when he had met me in person that he felt happy to oblige.

After everyone had left, Peirene and I argued about who deserved the compliment – me for my personal persuasion skills or her for the nymph’s growing reputation. Eventually we maturely agreed to differ. But we both decided that Robin was one of the finest poets in the land. We would be delighted if he came again and we hope that the flowers look good in his garden.