Peirene’s Troubles with her Men

Last week Maddy took Peirene by the hand and introduced her to the coffee shops of London. In each one they handed over our beautiful 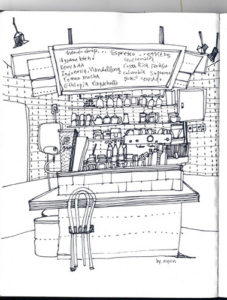 poster, presented our books and pitched reading as an integral part of European café–culture. The nymph reveled in the attention.

That was the beginning of the week. It went downhill for Peirene from there on.

The texts for 2011 needed a last push from me. And they got it. But it came at a cost. Peirene had no one to entertain her once Maddy had to attend to her other part-time job.

The nymph was soon bored out of her mind and wanted to catch my attention. So she tried to cause some havoc.

“No one will want to read these books,” she stated looking over my shoulder. “You’ve really made a mistake with those. English readers want characters they can identify with.”

I tried to shut my ears.

“Just look at your 2011 heroes. The first one a chauvinist. The second a man with a huge anger management problem  and as for number three, those guys in the short stories make Beckett’s Krapp appear like a social butterfly.”

She lowered her voice and whispered into my ear: “Come on, we want to sell books, why don’t you add in a few recognizable middle-class characters: a psychiatrist, a detective chief inspector, a news-paper reporter, an eloquent mother. No one would notice. And then we might boost our revenue.”

That was finally it. “Peirene, if you have nothing sensible to say, then be quiet.”

“I am just telling you which books sell and which don’t.”

I continued “Because the 2011 titles are each reminiscent of those great works.”

I had won my argument. Peirene left me alone for the rest of the week. In fact, she continued where Maddy had left off and visited a list of cafes from Kilburn to Barnes. She left quite an impression with all six books. So what can I say? She’s still my top nymph.