Peirene has won an Oscar!  To be precise: The Independent Publishers’ Guild Newcomer of the Year Award 2011. In the world of 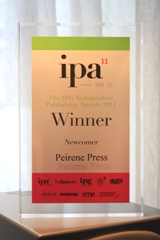 independent publishing that is the equivalent to the Oscars. And there is no need to titter at the Oscar comparison:  The IPG is made up of 560 Indy British publishers, including big players such as Faber & Faber and Canongate. Each year they award eleven prizes, for achievements such as  Best Innovation, Best Consumer Publisher, Best International Achievement and this year, for the first time, Best Newcomer.

On Thursday, Maddy and I with the Nymph in tow got into the car and drove beyond Oxford to Chipping Norton. We were one of three short-listed publishers for the Newcomer Award. The winner was to be announced at the  Gala dinner that evening. The Nymph was complaining: “Why can’t they hold the event at the Hilton on Park Lane? Anyway, we are not going to win. Basically we are just driving up and down the motorway for nothing.”

At dinner I sat next to Alan Grierson, the director of BrightRed Publishing, one of the other two Best Newcomer short-listed publishers. He told me that annually they ship out of their warehouse tens of thousands of books ( I have to confess he told me the exact figure but it has in fact slipped my mind). I, in return,  told him about our innovative marketing technique of reaching out to new readers via our literary salons, coffee mornings and roaming store. The Nymph made me a sign from the other end of the table. I followed her to the Ladies. “This is embarrassing, let’s go home.” She insisted. I shook my head and practiced my little acceptance speech one more time – just in case.

After the dinner, the award ceremony commenced. The Newcomer Award was the sixth on the list. When Peirene’s name was announced, all I heard was a rushing in my ears, and then the applause. I saw Maddy at another table throw up her arms. I stood up, walked onto the stage, received the award, a picture was taken. I thanked everybody and gave my little speech and walked down and sat down. And that was it. It went by in a flash. At that moment all I remember thinking was that I had kept me nerves under control and I was pleased about that. Now I would love to repeat those couple of  minutes at least one more time, if not twice or three times, to really relish and cherish them.  But I guess that is fame – it comes and goes in a flash.

On Friday, I received many wonderful congratulation emails. My favourite is from another publisher, John Conway from Essential Works, who I first met when both of us were watching our sons play football one Sunday morning two years ago: “I remember you telling me on a windswept touchline in Regents Park that you were about to start a new publishing company and I thought you were moderately mad. Or maybe it was passion – and it is wonderful to see that has turned to success.”

The Nymph has decided to take a couple of days off. “One needs to celebrate one’s successes when they come along,” she told me. For once she is right. And a company outing should be on the agenda soon. But for the time being someone needs to keep the show on the road. And the Nymph clearly isn’t. I spent my Sunday manning a stall at Lauderdale House selling books to sceptical passers-by.  Important work – but  I felt a long way from that black-tie dinner.