So it has worked. I mean, the dirty weekend story. It got me publicity AND sales. I am sure that’s what did the trick. On Tuesday I received a 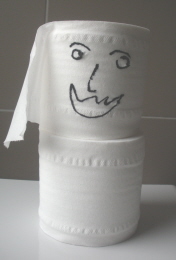 message from the distributor: “We are invoicing the last copies of Beside the Sea!” On Thursday morning  The Independent congratulated Peirene “for choosing this gem of a novel”. And on Thursday afternoon my nymph and I featured on the Elle magazine cover – ok, nearly. But we did make it onto the Elle blog.

Actually it’s quite good we didn’t make the Elle cover. I don’t feel the part at all. I should be in seventh heaven, walking on air, head in the clouds. Also, I had that infamous break (this is the last time I mention it –  I promise) only two weeks ago. So I should be happy. Instead I am exhausted, every task is a mountain, I hate my to-do list, which just seems to get longer and never shorter, and I am once again at the point where I will give it all up. This time for real. The juggling act between Peirene, house and family has anyway been heading for total collapse, so I might as well count me blessing while I am still sane and leave with my dignity intact. And since I can’t give up so easily house and family, it has to be Peirene. I am not making a drama out of nothing. I am dead serious.

Last night I went out to a reading. Before I left the house I had cooked for my children some food – to be precise, rice with pesto, since this was the only food I had handy. I had had no time to shop. So I left the house feeling guilty and a bad mother. After the reading  I went out for a drink with some colleagues (the networking bit – has to be done) and arrived home when children and husband were fast asleep. In the bathroom I realized we had run out of loo paper. I went to the kitchen to get kitchen paper – that had gone too. So I decided – wise me – to make myself a cup of tea to calm down. And guess what, we had run out of milk too. I went to bed with a burning sense that I couldn’t cope any more and decided at four o’clock in the morning that something had to give: Peirene.

Of course giving up Peirene won’t make me happy. It probably won’t even guarantee an uninterrupted flow of loo paper in our household. And as for bad-mother-feeling and guilt ?– I had them before Peirene too so no change there either. I am therefore dead serious. I want to give up Peirene, but I won’t. I will however go now and make myself a nice cup of tea ( I bought loo paper and milk this morning – really no big deal and no one had come to harm in the meantime ) and sit on the sofa and read the reviews –  just one more time – and pat myself on the shoulder. Well done me.

I am feeling better already, just talking about it. So perhaps, after the cup of tea, I might start plotting on how to get on to this Elle magazine cover after all.