Peirene author No 3, Friedrich Christian Delius was in town for three days. So was the Pope. 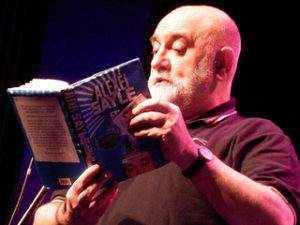 The first evening was a success and the Pope definitely lost out. Christian was in conversation with Blake Morrison. A match made in heaven, the authors talked about their mothers as a subject for literature. The Peirene Salon on Saturday went swimmingly too. Sold out with wine and whisky flowing till late at night.

It was the second event, on Friday evening, where Peirene – I admit – was left miles behind by the Pope’s mass appeal.

Weeks ago I approached a bookshop to see if they would like to host an event with Peirene’s author No 3. I knew this particular bookshop was supportive of independent presses. And sure enough they were delighted. I assumed as long as I did my bit to promote the event they would do theirs.

A day before the Big Day, I received a phone call from them. “Sorry, we didn’t order your book in, can you bring some?” I felt a twinge of concern but of course it was too late to change course. When we arrived at the bookshop their shop window was filled with copies of a bright blue book featuring a man’s head with a dog on top. Not a single Portrait of the Mother as a Young Woman anywhere. We entered the shop. And saw blue where ever we looked. One of the owners greeted us with a big smile: “We are having a signing of Alexei Sayle tomorrow.” That was too much for my nymph. She turned on her heel and marched straight out of the shop. I just managed to grab her by the collar.

“I am not staying here for a single second. They haven’t done a thing to promote our event tonight. It’s an embarrassment. I am so hurt. I want to go home.”

“No, you can’t.” I dragged her back into the shop. “Christian is here, Jamie, the translator is here, and Kim who I’ve asked especially to chair this evening, is here too. We will put on the show.” The nymph shed a few more tears of disappointment while Maddy and I quietly replaced  those blue books with our beautiful, tasteful Peirene titles. And when the curtain went up we had an audience of six who witnessed a show that deserved the Royal Albert Hall – at least.

Afterwards, in the car, Peirene was buzzing: “Best ever evening – brilliant, so inspirational, so energizing.” I couldn’t believe my ears.

“Excuse me, can you please explain yourself? You were the one who wanted to walk out.”

“Yes, and then I thought of the Beatles and how they staged gig after gig in an unknown  Hamburg bar before they broke through. That’s us now. Perhaps we should organize a few more events in bookshops who don’t care less?”

Frankly, the lesson I learnt looks slightly different – with the next bookshop I will talk in advance about window and floor space and will take nothing for granted. And I might even solicit some good advice from the Vatican about how to attract large crowds.