A few years ago I got stuck on the question: Why do we live in houses? Of course I understand the practical side of living in buildings. 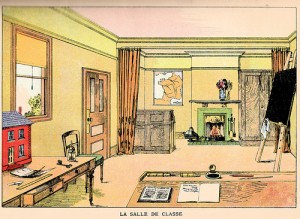 But why and how did our brains ever conceive in the first place of building shelters.

I’m not barmy. Honestly. Peirene is with me on this by the way. As an ancient Greek Nymph she, too, couldn’t get her head around buildings. However, she eventually found the answer in a book:

‘The archetypal house repeats the architecture of the universe; a ground below, a space between, a vault above, in which there is an opening corresponding to the solar gateway by which one ‘escapes altogether’ out of time and space into an unconfined and timeless empyrean. Functional and symbolic values coincide.’ (Ananda Coomaraswamy)

The quote solved the riddle.  Since then I haven’t wondered once why we humans live in houses.

This weekend Peirene’s first ever novella-writing masterclass took place In true Peirene style: not in an anonymous office but in a kitchen. In Shelley’s kitchen. Shelley is our creative writing tutor.

For two days from 10am to 5pm Shelley and her students gathered around her big kitchen table. They studied our Female Voice series, dissecting the texts in order to understand how the writers had achieved a unique narrative voice (Beside the Sea), conveyed an entire life story of a woman in less then 120pp (Stone in a Landslide) and created a real sense of place (Portrait of the Mother as a Young Woman). Moreover, they didn’t just talk, they also worked hard.  They had to write scenes from the perspective of nine-year old Stan, one of the children in Beside the Sea, and had to imagine pursuing Margharita from Portrait of the Mother through the streets of Rome in 1943. And finally they were provided with the chance for individual tutoring on their own pieces of work.

Peirene and I can’t really take credit for this course. We turned up at 4.30 on Sunday afternoon in time for the Prosecco and walked right into a buzzing creative atmosphere.

‘I think they had such an inspiring course because it took place in a kitchen,’ Peirene mused as we walked home. ‘The solar gateway – the hearth and chimney – were originally in the kitchen.  It is from this room that one escapes out of time and space. And that is precisely what a writer needs to do in order to produce great stories.’

I liked her interpretation.  But I know my Nymph just a tiny bit too well. ‘You are jealous.’ I laughed. ‘We could have held the class in our kitchen but my children wouldn’t have received any food all weekend long. I do think Shelley offers the students a better “solar gateway”.

Peirene pouted before adding ‘She is also a more patient teacher than either of us’.