In Bed With A Stranger 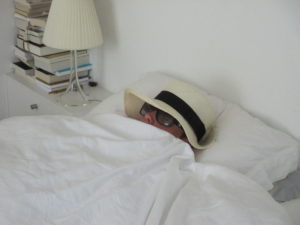 Our Roaming Store is heading into its fourth summer season. And while punters are attracted by our beautiful design, it’s the titles that determine which books they pick up first.

The top hits at our stall throughout the year are: Portrait of the Mother as a Young Woman, The Murder of Halland  and Mr Darwin’s Gardener. Why? Because the titles sound familiar.

In the summer Tomorrow Pamplona conjuring up images of Spain has been our seasonal bestseller for four consecutive years.

Sea of Ink, The Mussel Feast and Chasing the King of Hearts attract attention too.

In fact, the only title which causes us agonies is Next World Novella. Even though it is one of Jen’s favourite Peirene books. But she too struggles to persuade readers to hand over their money for it.

‘The title is too abstract.’ Peirene shakes her head when ever we discuss the dismay of the poor title. ‘I told you this from the beginning, didn’t I.’ The Nymph throws me a disapproving glance.

I admit it. Next World Novella was the fourth book I published. At the time I worried that the title might be too abstract. But I was less experienced in persuading author and translator to agree to a title change and so we stuck very closely to the original. That was a mistake. And now I know: if we ever going to reprint I will change the title.

‘In Bed with a Stranger.’ The Nymph beams. I furrow my brow as I don’t immediately understand. ‘The new title of the book, ‘she explains. ‘After all, the story is about a couple who’ve been married for decades only to discover that they don’t know each other at all.’ She pauses. Then she breaks into an even bigger grin. ‘And how about an alluring young couple posing on pink silk sheets for the cover?’

‘Peirene!’ I can’t believe my ears. ‘I really thought you had more class than that.’

She shrugs her shoulders. ’Whatever pays the bill is fine with me.’

Well, luckily I am the boss and such decision can’t be made without my approval.