High Heels brought down to Earth

High hopes. That’s what I had for the Frankfurt book fair last week. Yep, those ones over there. But, my God, how low did I sink, stripped of all 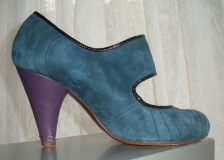 my dignity at the end.

Day One I managed well, twelve half-hour meetings and two parties at night. The next day I was fading. Another twelve meetings, one reception and one party later, I stood at the side of a road, ready to burst into tears because my feet were so painful and there was no taxi in sight. The following day I woke up with a desperate urge for some down-to-earth pragmatism. With five minutes to spare I rushed into the next best shoe shop and grabbed the plainest boots with the lowest heel I could find in my size. They did the trick – I admit. As I walked pain-free to my next meeting, I could hear my mother’s voice in my head: I told you, didn’t I, you’d break your neck with these mickey mouse shoes. Ha, she was wrong – I didn’t break my neck, did I, merely had a little cry because of swollen feet. That’s all.

So obviously I was terribly busy with shoe issues. Did I achieve anything else? Well, I sold all the Peirene books to Canada, made headway with American and Australian publishing houses who might buy one or the other title, I pitched for three new Peirene books. But the best was the networking. I just love the Frankfurt book fair. The amount of people one can meet there is just phenomenal– old faces, new faces, unexpected faces and afterwards all the contact via email and phone becomes so much easier. Face-to-face communication is still the top runner.

I also had some deep philosophical thoughts about numbers and that we humans are so impressed by numbers and want to impress with numbers. The first day, when asked how many books I intend to publish a year, I’d say six. A straight forward lie. I intend to publish four. Because with four I know I can give them their due – after all I am a one-woman-show and publishing books is just one part of what I do, in fact the easy part. It’s the marketing and publicity that takes the time. And I truly want to give each of my little babies their fair share. Somehow that sounds far less impressive than throwing around big figures.  I got better at sticking proudly to the truth the lower my heels went. But I vehemently would like to reject the idea that there might be a link between numbers and heels. In fact my mission until the next Frankfurt book fair is to find the ultimate heel  – high but marathon proof. I am open for suggestions.