On Friday Peirene’s Roaming Store manager Jennifer turned up at Peirene HQ at 7.30am. By 8.30 we stood outside Highgate Tube Station 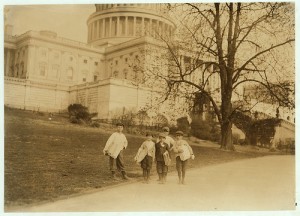 handing out Peirene newspapers. It was our first distribution day. A trial run.

We were nervous. In fact the Nymph felt so nervous, she fell ill and couldn’t accompany us. ‘I’m so sorry,’ she sniffed with a heavy cold. ‘I would have loved to support you.’  Secretly, though, I think she was pleased. The illness saved her from embarrassment. ‘What if people see us who know me,’ she had objected when I first suggested distributing newspapers outside our local tube station. And for days she had toyed with idea of wearing a big hat and sunglasses as a disguise.

Jennifer and I started off with twenty newspapers each. Jennifer stood at one entry, I at the other. I told myself if I manage to get rid of those 20 in the next hour, I’d done a good job. 15 minutes later my hands were empty. What’s more, people had smiled at me. Even the ones who didn’t take a paper. I had also figured out that I could catch people’s attention with the words ‘Would you like a newspaper about literature.’  Indeed a couple of commuters who had walked straight passed me, suddenly turned around. ‘Did you say literature?’ I nodded. ‘Yes, foreign literature.’ ‘Oh, how fascinating, I’ll take one,’ they replied.

By 9.45 we had distributed 160 papers. I walked through the station to check how many had been dumped. I only found three. The rest had travelled into central London. We were thrilled. And even our cold feet didn’t matter.

On Monday morning Maddy will join Jennifer in West London, at Barons Court station. So far we have four days across London planned. Afterwards we will reassess. But the signs are looking good for expanding our distribution route. The Nymph has perked up too. ‘I might join you when the weather gets warmer, ‘she has announced. ‘Up to then, I will be your strategic route planner and will staff the office.’ She sighs, as if she has to deal with the lion share of the job: ‘After all, someone has to keep the business on a straight path, while you are having fun around town.’