Last Friday I got up at 4.15am to wrap Peirene gift packages. By 6am I was done. I piled them into the shopping trolley and ventured into the 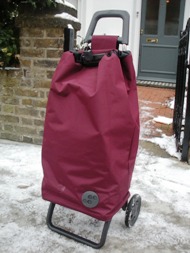 snowy icy morning, pulling the trolley up the hill to my son’s school.

It was the annual Christmas Fair and I had rented a stall. My first ever stall rental. I unpacked. At 7.30 the fair opened to the public. I stood between a lady selling cards and wrapping paper and another one selling tree decoration and little fairies in water bubbles. Crowds immediately gathered around the fairies in the water bubbles. Every now and again the Peirene books got a glance and a couple of people stopped for a second but then decided to go on. No one bought a book.

Admittedly at this point my mind was moving to other things. At 7.45am I had received a phone call. My husband. He was supposed to come back from a business trip to America that morning well in time to take our 11-eleven year old to his grade 4 piano exam. When my husband called me, he was still on the plane: “Meike,” he whispered into the phone, “I’m not suppose to speak. We’ve landed but we’re being held on the runway at Heathrow.”

Fortunately, I had anticipated such a turn of events. I had left money on the kitchen table and had told our son the previous evening that he might have to take a taxi if Dad’s plane were delayed. So I booked a cab and rang my son. He was incredible mature and cool about it. However, this didn’t prevent me from feeling like the worst mum on earth.

What exactly was I doing at this fair where clearly no one was interested in buying my books? And why was I allowing my darling boy to journey through the streets of cold London all by himself. I felt like crying. Instead, I decided to pack up.

“Have we sold any books yet?”

Peirene suddenly stood beside me, well rested and all rosy cheeks. I lifted my head. She handed me a hot cappuccino.

She mumbled an apology.

“Anyway, “ I continued. “ You’ve just arrived in time. We’re packing up. This has all been a huge mistake.”

For a moment Peirene looked as if she wanted to reply. Then she turned to the woman who had stopped in front of our stall, briefly glanced at Portrait of the Mother  and was about to turn away again.

“This is a 117-page long single sentence,” Peirene smiled at her, “which reads like a page turner. Nick Lezard in the Guardian said this story has one of the most moving endings he has ever read.” The woman looked at the book again, while Peirene chattered away. Eventually she bought not only Portrait but also Beside the Sea and a gift pack.

During the next hour and a half Peirene and I sold 11 gift packs and a number of individual books. My husband made it in time to pick up our son from the piano exam. And the piano exam went well. I am pleased I stayed at the bookfair if only to prove what I suspected anyway. Peirene’s books sell by word of mouth. People love the idea of two-hour books, they love the idea of translated fiction, they love the idea of strong voices and unconventional stories but they have to be pointed in the right direction. It’s called hand-selling – but you need a nymph to do it well.