Women can multi-task. It’s one of the glorious advantages of our sex. We are born with it. It’s an integral part of us. I’ve been thinking 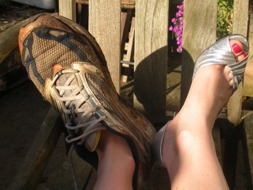 about this assumption for some years and, taking myself as a sample of our species, studied it closely. I am now ready to publish my findings: the above notion is wrong.

Or, let’s put it differently, if it is true than I am a rare sample of our species. The Woman-who-cannot multi-task.

Or perhaps I might even be a man in disguise.

Like a man I can do one thing at a time. I concentrate on the task at hand, try to give my best and then move on to the next. Like a man I go into tunnel visions. And, like with men, that sometimes takes extreme forms. My right hand doesn’t know what my left hand was doing a second ago.

On Tuesday I sent out Peirene’s April newsletter which sports a great quote by Oscar Wilde. “Anyone can write a three-volume novel. It merely requires a complete ignorance of life and literature.” Perfect for the Nymph’s books. That evening I received a lovely email from a wonderful publisher colleague who also happens to be the publisher of the Millenium Triology. He congratulated me on the IPG award and then went on to say, that he will kindly overlook Mr Wilde’s remark. I read his email and reread it. In fact I read it a few times. Do I know a Mr Wilde and which remark? I couldn’t make sense of this email at all. So I wrote back. When I received the reply, I had to laugh. I realized that  Peirene’s April quote had gone straight out of my head the moment I had sent the newsletter

On Thursday I looked in my calendar in the morning. I noted that at 3pm the guest editor of the next Ms Lexia issue wanted to come to my office to interview me. I made a mental note in my head to leave my desk in time to wash my hair, put on some make-up and change from jeans and old T-shirt into something more respectable. Then I wrote my to-do-list for the day, put my head down and started to work. Suddenly the doorbell rang. I jumped up. Who might this be? I opened the door. The editor had arrived. It was 3pm. The appointment had totally dropped out of my mind.

But no harm done. The interview took place. The nice editor didn’t seem to mind my jeans. And actually Peirene has made some good progress this week. No 5, Tomorrow Pamplona, has arrived from the printers and I have finally bought an e-reader and downloaded all the manuscripts I need to took at. I also have decided to pay more attention to Peirene’s Facebook page. Not only have we started to run a weekly quiz, with the first winner already announced, but also the Nymph and I  have become film makers. “The Arrival of No5 – a haunting and lyrical exploration of The Book” is up on Youtube and Facebook. Forget Madmen and The Wire – PeireneDrama is the new thing.

And so, perhaps, I can multi-task after all.

“Frankly, I am pleased about that.” Peirene throws me an approving glance. “I wouldn’t have wanted a male publisher. He couldn’t possibly understand my desire for sophistication and good looks.”