The nymph has a crush. On her Dutch author, Jan. Her behaviour is quite despicable. I’ve been telling her that this not on. We are a 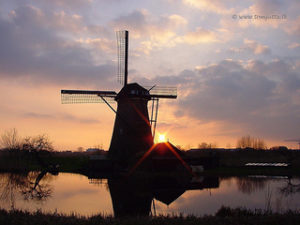 respectable company – no office romances. But she’s gone deaf, her head has been turned.

“He twitters”, she cooed, when I demanded an explanation.

“All a man has to do, is to twitter?” I replied incredulous.“Peirene, frankly, I expected more of you.”

“He doesn’t just twitter,” she continued in a soft loving voice. “He twitters in English. And, oh, he does it so well. He tells little stories and makes profound statements and chats to my friends. He is the perfect man for a nymph,” she concluded, gazing blurry eyed right past me and out of the window.

I had heard enough. I know how it started. And I have no one else to blame but myself.

On Monday I tweeted about meeting one of our authors, Matthias, in a Highgate pub. I wondered aloud about whether I could persuade him to tweet in English. Jan – so far Peirene’s only internet-savvy author – picked up my tweet and suggested that perhaps he should twitter in English too. I was thrilled with his proposal. Maddy then thought of the name PeireneVoices, where any Peirene author and translator can twitter. She set up the account and created a beautiful elegant logo. And there is Jan now tweeting away daily, gaining fans months before his book comes out. No wonder Peirene has fallen for him. I understand. I was once young too.

So I showed compassion and tried to reason with her.

“You are too young to get tied down. Look around. Test the field. There are other attractive men lining up to meet you: not only Jan, but also Christian, Matthias and Alois, just to mention a few.”

“But they don’t tweet! Not even in their own language. Let alone English.”

“Well, give them a chance. Christian will be our guest twitterer on Friday when he is here in London and Matthias will be in the UK for two whole months at the beginning of 2011. I’ve got a hunch, he might be twittering by then.”

I could feel she was softening.

The nymph thought for a moment. Then:

“So when did you say Christian is coming?”

“Thursday and he’s staying till Sunday.”

“Yes, he’s got events booked for all three evenings.”

I  returned to my desk. Every now and again I threw a glance across to Peirene. I could see she was thinking. Eventually she turned to me:

“Is it ok if I take next Wednesday off? I need to go to the hairdresser, and have a facial. I might get my nails done too. It was on my mind anyway. Nothing to do with Christian coming. Just so as you know. And Jan’s still the best twitterer.”

Oh yes, my dear little nymph is vane and – most of all – rather fickle.