Running your own company has one mega disadvantage – you need to know your figures. 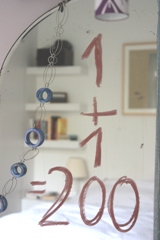 Having said that, I do like to think of myself as a woman who knows no fear when faced with numbers. After all, my two main “Abiturfaecher” (A-level equivalent in Germany) were German and Maths. Moreover, I taught my kids not to be scared either. “Half the battle is won if you just look at the figures,” I’d tell them. “1+1=200? Does that makes sense? Where do the two zeros come from? Just look and think and you’ll know it can’t be right.”

However, for the best part of Peirene’s existence I’ve been trying very hard to turn a blind eye when it comes to figures.

Peirene’s figures had a glorious moment back in December 2009 when I sat up a beautiful spreadsheet to account for month-to-month cashflow. Only I didn’t update it for months. At regular intervals I would hand receipts and sales statements over to the accountant and hoped that my job was done. Of course it wasn’t. Keeping record is one thing, putting all figures into a single spreadsheet to compare and analyse them is a totally different exercise. This dawned on me in autumn 2010. Thus,  in a weekend-long session I updated the spreadsheet. Since then, at the end of each month I input the numbers and contemplate their meaning. Proudly I thought I’ve finally got the hang of the Peirene numbers.

A few weeks ago the Company Accounts for tax year ending April 2010 landed on my desk for signature. I looked at the figures. I had never seen a Profit & Loss and Company Balance Sheet before. Nothing made sense. I didn’t have a clue what I was looking at. I picked numbers at random and told my accountant they don’t match up with what I had. I was right and the accounts were adjusted. But they still didn’t make sense. Eventually I realized there is no way round it, I need to undergo a crash course in P&L and Balance sheets. Luckily hubby happens to know this sort of stuff. He was summoned, we spent a day in front of the computer. By the end he gave me a loving compliment: Meike, you learned in a day what I spent a year studying at Business School.

Last week I had a meeting with the accountant. It was fantastic. For me at least. Not sure about them. I knew exactly what I was talking about. As I walked away form the meeting I had the same euphoric feeling I usually get when a text falls into  place on paper, when suddenly rhythm and voice and structure and plot come into alignment to from a single piece of art.

I invited the Nymph for a cappuccino in the glorious spring sun.

“A small one. We filed our accounts two weeks late.”

“Why are you so happy then?”

“Because it’s a wonderful feeling when you suddenly understand something inside out. I now know our figures, and I understand their connection and their effects on each other.”

“Hm, not sure, that rocks my boat,” Peirene conceded.

I, on the other hand, fell asleep that night with the balance sheet standing  clear and clean and tall in front of my inner eye. And for the rest of night I slept as soundly as a baby.