Manning our roaming store can be sobering experience. I was on stall duty twice this week. 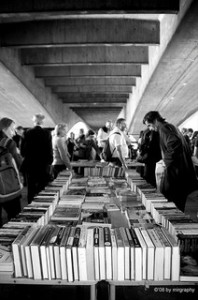 There is the man who bought Tomorrow Pamplona from me two years ago. Three months later he returned and let me know that’s it’s the worst book he’s ever read. He would certainly never buy another Peirene book, he stated. With a smile I now point out that we have some new titles. He should try, perhaps, The Mussel Feast. It’s got longer sentences and no sex. He might like it. He shakes his head. He hasn’t changed his mind. He will never again buy a Peirene book. Ever.

‘Still, we clearly impressed him,’ the Nymph muses. ‘Otherwise, why did he stop by? Nice of him.’

There is the middle aged woman. She’s attracted by the design. She picks up the books. Tight-lipped, suspicious. After all, looks can be deceptive. I ask if she has come across our books before. She shakes her head. She certainly won’t engage in a conversation. She won’t be sold to. Absolutely not. She humours us by taking a flyer.

‘She wants to check us out first,’ the Nymph whispers. ‘And hopes for a better bargain online.’

And then there is the unpublished writer. He’s delighted to meet a publisher. He smiles, his eyes shine brightly. But when he hears that we only deal in foreign fiction he hurries to leave. I try to persuade him that he can improve his craft from reading our books and that our events offer him the opportunity to meet like-minded people. To no avail. He has already moved on.

‘He’ll be back, ‘the Nymph hisses. ‘There is no better way to hone his skills then by looking at our perfect novellas.’

So, does anyone buy Peirene books for Christmas?

The connoisseurs. There are two groups. The ones who have come across our books before, read a review somewhere, heard about us from a friend. And the second group consists of shoppers who need to buy serious books for serious readers. They have in mind their stepdad, their girlfriend, their wife – and instinctively they recognise a good deal. They often buy in bulk. They are the Nymph’s heroes.

We ran twelve stalls in November and will run another thirteen up to Christmas. We’ve done well so far: made a few thousands pounds and sold hundreds of books. But today we hit the jackpot. At the Christmas market in Belgravia. People were queuing at Jen’s stall and she SOS’ed for more books after two hours. Who would have guessed that the most discerning London readers live in affluent Chelsea.

Peirene throws me a pitiful glance. ‘It’s not the post-code, it’s Jen. She’s just a brilliant bookseller – and she never seems to attract awkward customers, unlike some people I could mention.’