What is love? Does true love need reciprocation? What is better love received or love given? 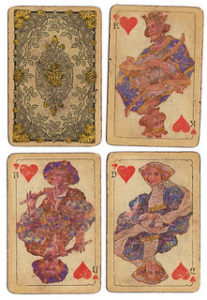 I’ve appeared at four literary festivals last week. Soho, Shoreham, Henley and the London Lit Weekend. I was invited to speak about my own novella Magda. Magda Goebbels is, of course, a compelling subject, but I also talked about Chasing the King of Hearts. Magda and Chasing the King of Hearts come together. One I wrote, the other I published. Two sides of the same coin. One about a leading Nazi wife, and the other about a Holocaust survivor. Together they explore the nature of love.

Magda is desperate for love. She has never received it and thus does not know how to give it. Izolda, the heroine of Chasing the King of Hearts, gives love without worrying if it will be returned to her. All that matters to her is that she loves her husband and that she wants to save him. Even we, the readers, never know if Shayek harbors similar feelings for her. His actions suggest at best indifference.

Izolda survives. Magda kills her own children and herself.

‘So, if it is such a fantastic love story, ‘ Peirene shakes her head, ‘why has hardly anyone written a review?’

I, too, am amazed how little attention this book has attracted. One press review and three blogger reviews. Three weeks after publication. For a Peirene book this is very little. And it has never happened to a Peirene book before. Have we run out of luck? The Jewish press hasn’t picked the book up either. Both Nymph and I are slightly perplexed. After all, this is a masterpiece of literature in general, and Holocaust literature in particular. The book should be taught at schools and universities.

‘I’ve read the book.’ a reviewer told me last week at a drinks party. My mind was elsewhere and I didn’t immediately know what she was referring to. ‘Well, Chasing the King of Hearts,’ she added after seeing my confused face. ‘And?’ I asked. ‘What do you think? Will you write a review?’ My friend didn’t look very happy. I worried she didn’t like the book. ‘I am speechless,’ she replied. ‘I’ve finished it a few days ago and I have no idea how to write about it. I’ve never read anything like this. And I am concerned I couldn’t do the book justice.’ I laughed. ‘Why don’t you write exactly that?’

But as I walked home I suddenly wondered if that might be the problem: This book is written so differently from comparable literature. There aren’t too many “Holocaust Romances”. I’m publishing work in a niche genre. Perhaps readers are worried about how they might react?

‘I take your friend’s comment as a compliment,’ Peirene smiles. ‘We are staying true to our word. We offer unusual books – ones that challenge the reviewer as well as the reader.’

I just wish that some journalists would confront this challenge and then tell the world what they think. Chasing the King of Hearts deserves nothing less.