The Pain & Passion of a Small Publisher

Peirene Press takes its name from a Greek Nymph who turned into a water spring. The poets of Corinth discovered Peirene’s source and for centuries drank its water to receive inspiration. Today Peirene has taken up residence with our publisher Meike. She is a nymph with opinions, tantrums and a passion for books and clothes. In this blog, Meike charts their life together.

In October 2018 Meike moved to Beirut for a year. She is working there for the charity Basmeh & Zeitooneh with whom we collaborated on the making of Shatila Stories. In the Shatila refugee camp Meike is now helping 100 Syrian and Palestinian women to set up their own bespoke needle art business, Shatila Studio. You can follow them on twitter, Facebook and Instagram @ShatilaStudio .

The Nymph Arrives in Beirut

Enough is enough! I, the Nymph, have made a decision. 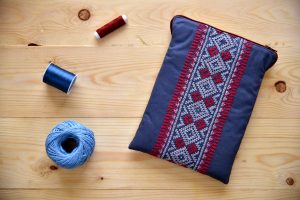 An ipad pouch made by the Shatila Women’s Studio.

When Meike left for Beirut at the beginning of October, she wanted me to stay in London. She said that the publishing company needed me.  She claimed that Molly would appreciate my support. However, it quickly became clear that Molly – helped by Jen, Ben and Stella – was doing just fine.  More than fine. First class. In the meantime, I twiddled my thumbs for two months with nothing to do. And what about Meike in Beirut? Well, she, poor woman, was obviously struggling.

‘It’s tougher than I expected,’ she told me over the phone. ‘A new job, a new culture, a different language. I have lost all my reference points – internally and externally. I no longer know when I perform well or when I struggle and what I’m supposed to do. And I haven’t figured the little routines that allow me to recharge,’ she sobbed into my ear.

I gave her lots of good advice from ‘Concentrate on one thing at work, not ten,’ to ‘Go and have your nails done’ (that always helps me).

‘I have no time,’ Meike replied. ‘I’m researching waste management in Lebanon. I’m writing grants applications to set up small businesses in the north of the country, and the women’s workshop in Shatila is closing down at the end of the year.’

‘What?’ I gasped. ‘The women workshop closing?’ I couldn’t believe what I was hearing. ‘Didn’t you take up the job to turn the women’s workshop into a viable business!?!’

‘I know,’ again Meike began to sob. I shook my head, I was running out of patience with her sobbing. She continued: ‘But I didn’t realise that the funding would stop at the end of December. We don’t have any capital and the monthly income of the workshop is simply not enough to cover the costs.’

‘But didn’t you say that there are 100 refugee women who will lose their income? And many of them the only breadwinners in their extended families?’ Meike began repeating words like “lost cause” and “hopeless” but by then I had stopped listening. I was already checking the internet for flights to Beirut.

Ancient Greek Nymphs can play many roles. With our publishing house in London I have given international writers a voice in English. Now I will help the women from Shatila to find a voice, run a business and earn an income.

And nothing will stop me.

A lot has changed since my arrival two weeks ago. I have persuaded Meike to make the women’s workshop her top priority for the coming year, and she has now moved her (and my) desk from Basmeh & Zeitooneh’s headquarter right into the heart of the women’s workshop in Shatila. We have even already persuaded a, pro-bono, eight-person, consultant team to help us streamline the operations. And as a little gift, they have set us up with a beautiful spreadsheet to log all costumer sales, complete with a range of groovy graphs.

Meike was right. There is a lot to do and we have a huge uphill struggle ahead of us. But we are not alone. There are some fantastic women working in the workshop.

‘You know, Peirene,’ Meike confessed a couple of days ago. ‘This has been the best week since I arrived in Beirut. I’m so pleased you are here. We turned Peirene Press into a success. Now we’re going to do the same for the Shatila Women’s Studio.’