Foreigners are taking over the UK publishing world! Are you aware of it?! I’ve mentioned the secret plot to a couple of literary editors 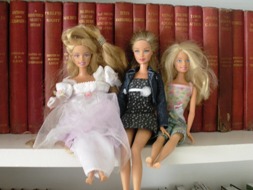 recently but none picked up on the story. They probably think the topic is too hot, too controversial. And rightly so, the very foundation of the English book market could be in peril.

I am not talking about foreign books by the way – no, I am talking about people, foreign people are attempting to run the UK publishing world. Think of Alma, Bitter Lemon, Pinter&Martin, Haus, Pushkin, and of course Peirene. And let me point out something else: half of these are set up and run by women – foreign women. Pushkin by South African Melissa, Haus by German Barbara and Peirene by German me.

Let’s just scrutinize these last three ladies a bit closer: Melissa set up Pushkin 10 years ago. She publishes classical and contemporary European literature and has rekindled interest in writers such as Stefan Zweig. Phillip Pullmann called Pushkin “a small box full of treasures”. Barbara set up Haus six years ago and has since then turned the company into a bit of a conglomerate, publishing history, travel, politics and foreign literature too. Her new imprint, Arabia Books, specializes in translations from Arabic. “The Dark Side of Love” by Rafiq Shami was named last week as one of the top ten  Books of the Year by WH Smith. And then there is moi meme of Peirene. Our third title has just gone into reprint, which means Peirene’s entire fleet of titles have moved into second print-runs.

So, what sort of foreign creature are we: mad women? Amazons? Truth to be told I’d like to think of us as the three Graces, bringing beauty and mirth and good cheer to the Anglo-Saxon publishing world. But such self-adulation could be interpreted as presumptuous. Let’s leave it then. Therefore, Amazons – men-killing, son-eating, one-breasted…nope, I’m really not keen on this description at all. That only leaves mad women. I guess we are indeed mad, book–mad.

But there is method behind the madness. I don’t think any of us plans to take over this island. But we grew up in countries where book markets and reading cultures are more diversified than here. And – speaking for myself – that has taught me the virtues of cross cultural influence. After all, imagine Christmas without a Christmas tree. Let us thank the Victorians who allowed  foreign pollen blow across from Germany and germinate in Britain.