A Lesson from Winnetou

My first true love was called Winnetou. He was a native American Indian. A chief of the Apache tribe. Young, handsome, courageous, 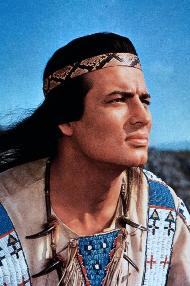 wise. According to the German romantic novelist Karl May, whose invention he was, he lived sometime in the 19th century. In fact, it wasn’t the fictional Winnetou of Karl May I was in love with but his 1960’s German TV incarnation, played by the very good looking French actor Piere Brice. Even at the age of seven I was discerning.

Watching Winnetou on Tuesday evenings was a huge treat. I would dress up with a wig of long black plaits and an Indian dress and my brother would hold a Tomahawk to defend me from the bad cowboys. For months I would go to bed telling myself that if I managed to wake up thinking of Winnetou, he would love me back. I often couldn’t fall asleep for hours because I was worried I would forget to think about him. But I never forgot. And he did love me back. Yes, he did.

My Winnetou romance has taught me an important life lesson: If you want something badly enough, the impossible becomes possible. You just have to dedicate your energy and effort and thought to that one aim.

Nowadays, when as a publisher I am asked to name my favourite Peirene book, I usually say ‘I love all my book babies.’ If then I feel the need to specify I name at least four, one from each series.

I made this decision in full possession of my senses: namely when I realized that the book wasn’t selling and didn’t even attract reviews. Over the last few weeks it has received stunning reviews and on Thursday this email from our distributor landed in my inbox: ‘Looks like we finally have some serious orders coming though. It can take a while for the penny to drop! I think we need a reprint. How many??? The definite good news is that this one is taking off!’

Unbelievable but true: Peirene has a bestseller on her lovely Nymph’s hands.

‘And you think this success is due to your will power alone?’ Peirene asks with a hint of mockery. ‘How old are you: 7 or nearly 47?’

I decide to ignore her comment. Instead I pick her up and dance with her through the office, fondly remembering Winnetou who caused me so many sleepless nights nearly forty years ago.