My husband and I spent a week on a Scottish island. Just the two of us. It was bliss, not least because the cottage had no internet connection and received no phone signal. 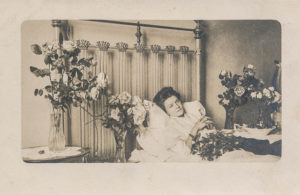 Not even the Nymph could get hold of me. She saw me off with a smile. ‘Don’t you worry. I have everything under control. I hope you and your husband have a wonderful time.’ She blew me a kiss.

On the ferry heading back to the mainland, my phone signal was restored. I found ten missed calls and seven messages, all from Peirene. The first one said: ‘Ring me back. I’m exhausted. I can’t go on.’ The last simply announced: ‘I’ve been advised to take it easy. So I’ve delegated the work and will spend the rest of the week in bed.’

I called her immediately, suddenly feeling guilty for having turned my back on her for an entire week.

Her voice changed straight away.

‘You left us all alone with that stall.’

Last Sunday Jen, Gianna and the Nymph had indeed run a very special stall. We put stickers over the prices on the books and asked people to pay whatever they liked. It was an experiment. We wanted to see how much readers think literature is worth, and we also wanted to test if we can attract interest from passer-bys who would otherwise ignore our stall.

The day was a success. Jen had already briefed. The three of them made more money than we anticipated and spoke to over a hundred people in five hours, many of whom then bought their first Peirene book and, quite possibly, their first book of foreign literature.

‘But some people were so negative.’ Peirene sighed. I could hear her swallowing her tears. ‘ Someone said that he thought indie publishers take advantage of pretentious customers and charge too much for books. So he gave us 50pence for a copy of Tomorrow Pamplona. Someone else said that he thought our books should cost under £5 as we don’t have a shop so our overheads should be low. When I tried to speak about translation expenses and printing costs he simply said “Ok then I’ll give you £2.” Can you believe it?’ she sobbed.

I let the Nymph cry for a moment, then I interrupted her flow of tears: ‘But from Jen I also know that you had some very encouraging conversations.  For a start, any one who had bought books from us before, paid the full price. What a vote of confidence. And then there were a couple of people who only had £2 or £3 left in their wallets and hadn’t brought cards to the market. They actually refused to take a book, saying they wouldn’t take advantage but would come back in June to pay full price. And one guy said he had often passed our stall but that he was on a tight budget and so could never afford them. He paid £4.50 – all the money he had left! That made Jen’s day.’

‘Ok, if you say so,’ Peirene sniffed a couple more times. ‘But for me it was a very hard day indeed.’ Then she finally calmed down.

‘So, who advised you to take it easy for the rest of the week?’ I was dying to know.

‘Jen and Gianna. They recognise my delicate constitution,’ the Nymph replied and then added:  ‘I wish all the women at Peirene HQ could be so understanding.’